A new event that I find important is the Asser Colloquium on The EU in the World: External Relations Law for the 21st Century, taking place on Friday, 2 October 2009 at the T. C. M. Asser Instituut at The Hague. Besides other famous participants, one can find the name Adam Łazowski, he has lectured in Estonia, from the Draft Programme of this event.

Founded in 1965 by the law faculties of the Dutch universities, the T.M.C. Asser Instituut claims having developed into a leading academic inter-university institute in disseminating in-depth and broad knowledge of international law and European law.

In 1997, the Asser Instituut presented a new definition of the European Union to the European Council in Brussels:

„A Union of Citizens and Members States must be identified from a legal point of view as a new category of international law and […] the European Union can be defined as an organisation of sovereign States, in which the citizens of the Member States are also citizens of the Union and in which the governance of the Union is not only bound by the rule of law, but is also required to meet similar democratic standards to those required of the governance of its Member States”.

The Instituut has its own publishing house, T.M.C. Asser Press. In addition to scientific journals, such as Netherlands Yearbook of International Law, European Constitutional Law Review, Hague Journal on the Rule of Law,  T. M. C. Asser Press is publishing academic works from authors from the whole World.

Some examples (first the books I have looked in): 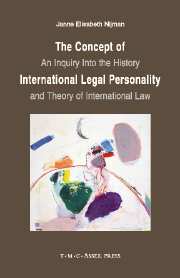 ● Wybo P. Heere (ed.), From Government to Governance. The Growing Impact of Non-State Actors on the International and European Legal System. 2003 Hague Joint Conference on Contemporary Issues of International Law, 2004 – Role of a rapidly growing number of non-State actors in the making, application and enforcement of international law, being especially embedded in local policy networks;

● Stephen C. Sieberson, Dividing Lines between the European Union and Its Member States. The Impact of the Treaty of Lisbon, 2008 – On the Lisbon Treaty and conferral of competencies. This book is also available electronically.

A book that I found useful for my Ph.D. Dissertation:

● Bernhard Hofstötter, Non-Compliance of National Courts Remedies in European Community Law and Beyond, 2005.

Another book that could serve as an example for conducting similar research in Estonia:

● Tamara Takįcs, Participation in EU Decision Making Implications on the National Level, 2008 – On participation of state officials in the EU decisionmaking procedures through a detailed case-study on Hungary.

Books that I would just recommend:

● Delano Ruben Verwey, The European Community, the European Union and the International  Law of Treaties – A comparative legal analysis of the Community and Union’s external treaty-making practice, 2004;

● Oliver Ribbelink, From Peace to Justice Series Beyond the UN Charter – Peace, Security and the Role of Justice, 2008;

● Ernst M. H. Hirsch Ballin, Linda A. J. Senden, Co-Actorship in the Development of European Law-Making. The quality of European legislation and its implementation in the national legal order, 2004;

● Egbert J. Dommering, Lodewijk F. Asscher (eds.), Coding Regulation Essays on the Normative Role of Information Technology, 2006 – Can  n o r m a t i v e  by function information technology be an alternative to legal regulation and, if so, what are the risks?

P.S. Why is The Hague named „Legal Capital of the World?”

In addition to the T. C. M. Asser Instituut, in The Hague lie:

– the International Court of Justice;

– the Organization for the Prohibition of Chemical Weapons;