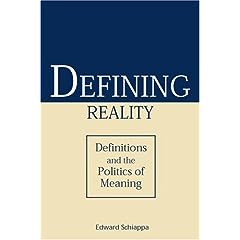 Searching for objectivity, answering questions, human beings who cannot be objective, reformulate the matter as „How ought we use the word X?“, or – in an already more value declined way – „X counts as Y in context C,“ „C“ meaning needs and interests, or meaning that beyond reality exists our interpretation of it. How much is „pure science“ human beliefs, influenced by history and social experience?

These are the questions Edward Sciappa discusses in: Defining Reality. Definitions and the Politics of Meaning. Southern Illinois University, 2003 – The book brings further Thomas Kuhn’s and Foucault’s ideas, the arguments reach from constitutional law to philosophy and cognitive psychology. In the beginning of the book, Schiappa asks how do people create linguistic categories and demonstrates how related it is to the surrounding people’s standards and learning experience, which means that children do not put together correct definitions, but instead they recognize sets of understandings that other people recognize. Consequently, children first learn and use understandings provided by people who belonged to their community before. Schiappa further demonstrates how easy it actually is for a child to form a category of, for example, „dog“, based on wrong understandings in the process of (natural or artificial) persuasion. Schiappa asserts that the processes of subconscious or conscious persuasion continue while people are adults, thus his argument is that people always [!] depend on politics and propaganda. Starting with definitions of dogs and golf, Schiappa brings examples from real debates about death, rape, obscenity in art, euthanasia, abortion, environmental and military (nukespeak).