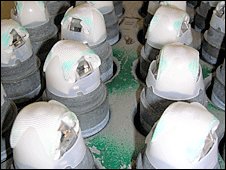 Cluster bombs have been used in Cambodia, Lebanon and Kosovo. Source: BBC News.

When I attended the course “United Nations and International Law”, read by Lauri Mälksoo at the University of Tartu, we were shown a film about international conflict resolution, the UN, and the global politics. Unfortunately, I do not remember the name of the film, although I believe that it is quite a well-known one. Though cluster bombs were not shown, land mines were –  the kind you step on and after stepping off they (and you) blow up.  The film we watched ended up with the scene, where a Serbian was lying on one of such mines (made in the EU as good(s)) that could not have been neutralized by the highest human might (the heads of the UN). The Serbian knew that if he moved, he would blow up – So he just remained lying there, all alone under the sky full of stars, on a bomb made by humans for other humans, unable to cope with the human wrong.

In this context, it is good to know that at least an international treaty banning other type of military devices – the cluster bombs has been ratified by 30 countries and will enter into force in August 2010, writes BBC. Link: http://news.bbc.co.uk/2/hi/europe/8519360.stm

Have you ever thought that peace costs? – Because, earlier I always used to think that only the military techniques and operations cost.

F.:  Though watching  http://www.youtube.com/watch?v=FOn3wkehluk&feature=related , I do not consider man-made threats the biggest in the world.