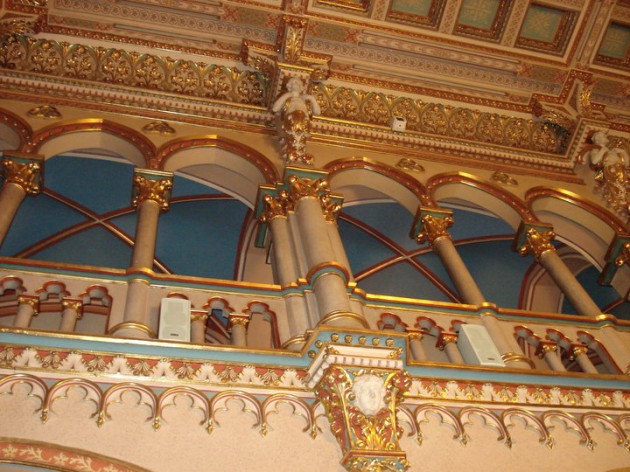 I attended the conference „New Values after the Lisbon Treaty“ today, 7 July 2010, organized by the Pázmány Péter Catholic University.

The conference began with registration and welcome buffet (Hungarian kitchen – food as part of identity), and was structured as follows:

14.10-14.30 Message of H. E. László Sólyom, President of the Republic of Hungary (not read personally by the president)

14.30-15.30 Joseph H. H. Weiler: Values, virtues and vices of European Integration – what we can learn from Aristotle and Aquinas

15.30-16.00 Catherine Barnard: The implications of the phrase „social market economy“ for a new vision of the internal market after Lisbon

17.05-17.30 Petra Bárd: Rejuvenating The Area of Freedom, Security and Justice after the Entry into Force of the Lisbon Treaty

17.30-17.50 Marcel Szabó: International Responsibility of the European Union after the Lisbon Treaty

György Fodor first stressed the foundational values of the EU, and the importance of political participation. The President’s message stressed the importance of integration, protection of fundamental rights, included the national minorities’ rights, values, Joseph H. H. Weiler talked about non-instrumental aspects of law. He brought clean air law as an example – we want policy issues into law. He reminded that law has always been in our culture, shaped by the culture and has itself shaped the culture. The EU has evolved from economic to political project. Weiler stressed the spiritual objective of the EU to bring people together in a „new way“, for what reason the EU’s success depends on how it looks empirically to and expresses the values. Weiler sees two trilogies of values: Peace-Prosperity-Supranationalism, and Democracy-Human Rights-The Rule of Law. Some more important remarks: If people believe in values, it means that they do not live in a community of hypocracy; (as common people do not understand values in the philosophical sense of ethics and morality); Value of honesty (how far could that go – should we monitor, what a man does in privacy?); Subsidiarity as meaning that people should be on the level of government; If there exist social problems and it is not the problem of NGOs to address social problems, who should address social problems; Voluntarism in Europe is the lowest in the world, being spread in church organizations; How do people experience universal human rights? Catherine Barnard talked about three values – social justice, solidarity, and social market economy, and analysed the cases Viking, and Laval, and the right to strike. Damian Chalmers started with the logical presumption that a government’s interest is to have healthy well-educated people, and therefore it guarantees rights to development (self-realization) and education. Still, some rights may seem illusory. For example, only 45 percent of people in the EU have mobile phones, the number of unemployed people is sufficiently big, and each year people get injured. We should take better responsibility for ourselves. Robert Schütze talked about creating democratic legitimacy in the EU. If government cannot do something properly, it can delegate some powers away. The same characterizes the European Commission that delegates powers. The question, then, is how to control that delegated legislation forming about 70 per cent of all EU legislation. Petra Bárd talked about mutual trust and mutual recognition in the framework of the Hague, Tampere, and Stockholm programmes, and fragmentation in the area. Marcel Szabó talked about the EU in the context of the 1996 Convention on the law of international organizations, he visualized the EU as a multi-layered entity, or Matryoshka, where the international law norms lie above, followed by the primary and secondary norms of EU law. He also talked about the case Kádi, in which case the CJEU allowed interpretation by it of the norms of a Security Council Regulation that have been incorporated in EU law norms, because the CJEU must have power to interpret EU law (even if basing on Security Council’s norms). Finally, Péter Kovács raised the question, whether a judge should interpret legal concepts „like that“, or should the interpretation base on philosophical basis.

The day was actually a very good example of how to gain political popularity and win, knowing human psychology, some economic and social facts, etc.