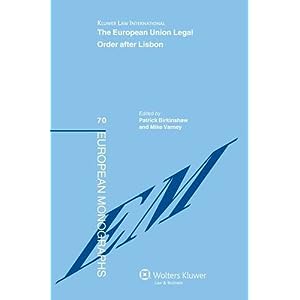 Enjoying the possibility to order EU law and international law books for the Tallinn University Library, one of the books I selected was P. Birkinshaw, M. Varney (eds.), The European Union Legal Order after Lisbon (Austin, Boston, Chicago, New York, The Netherlands: Kluwer Law International, 2010), published in the series European Monographs, being the 70th title in this series.

J.E Fossum looks in „The Future of the European Order“ (p.34) for the main cause of democracy in today’s Europe. He understands democracy as a legitimation principle, and as organizational form, where the legitimation principle can be embedded in different organizational forms, while he considers that there are two central requirements necessary – autonomy (those affected by laws must be authorized to make law – citizens must understand themselves as authors of law), and accountability. He asks, whether the main cause of democracy is the nation-state, the multilevel EU, or a viable European democracy that ultimately depends on local democracy. He concludes that talking of Europe’s future, one cannot solely base on nation-based democracy, as nation-state democracy is undergoing profound changes. With the help of citizens, Europe is growing out of nation-state. Fossum still sees such model of democracy meaning that the Member States should retain the power to control – and he is of opinion that the Member States should have the power of veto. That way, he understands, the federalists’ Monnet and Spinelli model of the EU (the EU being more than a support structure for the Member States) is supported. Fossum sees the EU’s particularity being that the EU’s relationship with its social contingent differs from that of the Member States, the clearest example of such being the European Parliament (p.38). While Fossum sees the elected directly by the people European Parliament as one channel of democratic representation, he sees as another channel the Council representing the people indirectly through their states. The named institutions have helped the EU to move beyond the intergovernmental model.

Fossum explains that the EU cannot be considered federal, because:

● it lacks a proper federal government;

● there exists significant incongruence btw. the tasks actually allocated to the EU-level on the one hand, and the representative body’s ability to control those at the very same level, on the other;

● the EU’s structure of authority is more dispersed;

● of the EU’s cultural pluralism and institutional heterogeneity.

Fossum considers the EU’s significant elements of statehood being:

● legal competence to exercise functions of statehood in a range of areas (human rights, economics, etc.);

He sees the weaknesses of the EU lying in the core state functions:

At p.49 Fossum stresses that there exists no unified European public sphere, and that therefore the scope for an all-inclusive public debate among citizens is highly limited. At the same page he assumes that if one understands the EU as a non-state based system of government, one could still view the EU as kind of pyramidal structure – Δ – on top of which structure lies the global system of norms; on the intermedial level of what lies EU law, and on the lower level lie the Member States and their regions.

What else was interesting for me in this article? Fossum names interdependence and interweaving parallelly as transnationalization, federalization, and cosmopolitanization.

A. Menendez writes in „Governance and Constitutionalism in the European Order“ about three key elements of the theory of governance as a theory of politics and law:

1) characterization of politics as a non-normative domain;

2) redefinition of law as a means at the service of efficiency (entailing its softening);

3) redefinition of the constitution from a fixed reference point to an experiment.

P. Craig writes in „Legal Control of Regulatory Bodies: Principle, Policy and Teleology“ about the EU’s regulatory bodies. He defines „regulatory body“ for the purposes of that article to include all EU bodies and agencies, included those who do not have power to issue binding regulatory norms, but still participate in regulatory process to varying degrees.

M. Feintuck, and M. Varney distinguish in „Regulating Media Markets: The Need for Subsidiarity and Clarity of Principle“ between:

M. La Torre distinguishes in „Citizenship and European Democracy: Between the European Constitution and the Treaty of Lisbon“ between treaty and constitution in the following way:

● A treaty is sth. produced by a state (being that way imposed from above – ↓ );

● A constitution is sth. produced by the citizens’ majority (being imposed from below – ↑ ).

La Torre further explains that a treaty does not necessarily assume a democratic procedure – it is an agreement, a commitment btw. distinct parties who remain so and in which they are guided by strictly business or prudential interest. Constitution, in Europe, is an act of popular sovereignty, by a people who constitute themselves as such, and who create a common arena of activity and coexistence. At p.199 he explains that the two terms are opposite and consequently one faces the following alternatives:

● either the citizens decide the structure of overall coexistence (constitution),

● or the head(s) of state reach an agreement to join forces in a particular area (treaty).

Starting from p.203, La Torre examines the citizenship clause in EU law, and explains that European citizenship is not a primary, original status, but sth. supplementary or derived, meaning that one is a European citizen if and only if one is a citizen (or national) of a Member State. Which means supranational citizenship, but does not mean “dual citizenship” that has been removed from EU law. He sees EU citizenship consisting of five rights:

-the right to petition;

-the right to address EU bodies in one’s own state language, whereas

he sees the right to good administration as under those rights, and explains that right separately at p.204.

At p. 207, La Torre writes about constitutionalism, distinguishing between:

● Constitutionalism of the Ancients – where 2 spheres of public power were separated:

-gubernaculum – sphere of government and of government prerogatives, where the courts have no competence and citizens cannot assert rights;

-iurisdictio – sphere of private rights, in which government power does not have sovereign prerogative, and that is protected by possible court action.

● Modern constitutionalism – where 3 basic characteristics may be distinguished:

a) public powers are subject to constitutional rules (so there is no gubernaculums as distinct from the iurisdictio);

b) constitutional rules are the product of extraordinary or exceptional procedure of collective deliberation (through this the community self-institutes itself in its majority);

c) citizens are holders of full and intense constitutional rights.

La Torre writes that modern constitutions are built on 3 pillars:

In the end of the article, La Torre also distinguishes between:

● “democracy” – in its classical meaning(s); and

● “demoi-cracy” – democracy in the plural; or rule of peoples in the plural; or plurist, not monist entity; or “multilevel constitutionalism”; or “mixed commonwealth”. He explains that different demoi can mutually recognize each other; and be capable of considering and reaching binding and enforceable norms.

J. Ziller writes in „Multilevel Governance and Executive Federalism: Comparing Germany and the European Union“ about 5 different functions exercised in the EU system of government:

2) Implementation – used also in Article 51 of the Charter of Fundamental Rights of the EU; Article 291 TFEU; and Article 17 TEU, the latter distinguishing btw. coordinating, executive, and management functions of the European Commission);

5) The organic function – derived from organ-theory.

J. Bell writes in “The Role of European Judges in an Era of Uncertainty“ about the different functions of the CJEU.

At p. 322 Kombos sees the CJEU as undertaking the task to provide critical human rights yardstick for assessing the lawfulness of EU measures intending to strengthen the security objective.

The book is an excellent reading for EU law lecturers, students, and other people interested in the essence and developments of EU law.